This roadmap represents prioritized work and projects that the ASA-IS team and ASA leadership have together identified that will provide ASA units with improved tools and support to better serve the UW community.

Additional projects will be added as current work and projects are completed and new priorities identified. The visual roadmap presented here is based on information in this Gantt chart image.

Review, develop, and establish policies that will be presented and supported division-wide in ASA.
Ongoing through April 30

Assist ISS with planning and implementation of Terra Dotta as a replacement to their current management system.
Deadline: January 25, 2022

Review, develop, and establish server-side container modules for use in ASA-IS tools and websites.
Deadline: February 28, 2022

Launch Kuali Build along with training to educate users on the form automation tool.
Developer: Web Team
Ongoing through May 31, 2022

Launch server-side container modules for use in ASA-IS tools and websites.
Ongoing through April 30 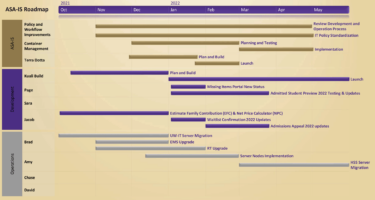